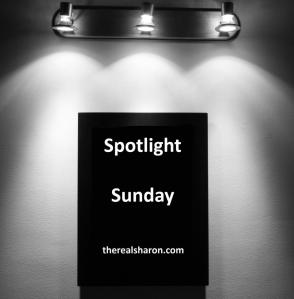 Welcome to my Spotlight Sunday! Every Sunday I put someONE or someTHING I love IN the Spotlight!

Anyone is welcome to use the idea on their own blog and spotlight whoever or whatever THEY choose, but if you do, please use my lovely graphic that my friend made somewhere in your post to show that the idea came from here! And I would love it if you left the link in my comments, so I could go check out what YOU spotlighted!

Still sick but it’s time to Spotlight someone and today I picked a music group called “The Birthday Massacre”. Before you run away now cause the name sounds creepy and you think this MUST be a group that sings about murder and blood and I must be crazy….No, you’re wrong, it’s just a name and stop judging something without learning more!

The Birthday Massacre is considered an Electronic Rock or New Wave type of band, depending on who you ask or where you look. They are a Canadian band and they have been around since 1999, although I honestly had never heard of them until about 5 years ago. They originally went by the name “Imagica” inspired by a Clive Barker novel of the same name BUT another band had a name close to that so they changed it in 2002 to The Birthday Massacre. Apparently this was the name chosen due to a song of theirs that went by this name. I feel like a bad fan because I honestly haven’t HEARD the song that their name came from and haven’t had good luck in looking it up!

I became a fan after listening and seeing the music video for “Blue” which surprisingly is probably the closest I have heard them come to actually fitting their name and sounding creepy.

Ok…I will go ahead and warn you that this song MIGHT be nightmare inducing, but as a fan of horror movies, I love everything about it. I urge you to give their other songs a chance first before you decide you absolutely hate this group, though….it’s like Night/Day.

This next video is of their song “Goodnight” which is one of my absolute favorites by them and it’s in NO way creepy. I love the lyrics so this video is the music WITH lyrics so I can share them with you. Favorite line-“You’re nothing if you’re just another”

I also have to admit I love their use of Purple and Black on most of their albums….

Here is their logo. 🙂

And here is the last video I will share. A song off their last album put out, “Hide and Seek”. There’s talk off their sixth album being released by the end of this year! So excited! 🙂

Why do I love this group so much? Well, besides the lead vocalist’s haunting voice (her name is Chibi by the way), I also find their sound very unique and exciting. I think their lyrics remind me of well versed poems that are surrounded by wonderfully enchanted chords and I feel like I’m transported to a land of dolls and make believe when I close my eyes and just listen. I don’t expect everyone else to necessarily get it or like this group, but I do, which is why I had to spotlight them and hope someone else will get the joy from this group that I have! 🙂

Enjoy and let’s hope I feel better next Spotlight Sunday!

Just a 37 yr. old married woman spilling out her heart and feelings through the written word View all posts by therealsharon

4 thoughts on “Fourth Spotlight Sunday of 2013”

I've spent my entire life chasing imaginary zebras while ignoring the horse standing right in front of me.

Finding My Lane
Everything Mommyhood

“He couldn’t see why people made such a fuss about people eating their silly old fruit anyway, but life would be a lot less fun if they didn’t. And there was never an apple, in Adam’s opinion, that wasn’t worth the trouble you got into for eating it.” ~from Good Omens

Hope isn't an emotion, but a daily choice.

Thought Catalog is a digital youth culture magazine dedicated to your stories and ideas.

Smile! You’re at the best WordPress.com site ever

Women Who Think Too Much by Jeanne Marie
Becoming Cliche

My Journey to Becoming My Mother

Class, Sass, and a Lot of Ass

Ideas about English, Drama and ICT in the classroom, as well as some broader musings

The search for meaning, one page at a time